Warhead is a block in Space Engineers.

The warhead is an explosive device that is set off by contact with blocks or items or when it takes damage from thrusters or weapons fire. Contact with a player will not cause it to detonate.

Alternatively, by accessing the terminal players can detonate it manually, either immediately or after a countdown. Players can use this countdown time to get out of its blast radius or use an Antenna and Remote Control to detonate it from another ship entirely.

Warheads have a greater explosion radius than missiles and can be useful when demolishing structures or tunneling through asteroids.

Note that warhead power obviously differs depending on size - a Small block would barely deform one layer of Large light armour, whereas a Large warhead would crack through half a dozen layers.

Warheads need to be armed to be detonated through damage or the manual detonation button - otherwise they just get destroyed like regular blocks. An armed warhead will be destroyed very easily, so players should excersize caution when handling anything that contains armed warheads. Note that arming a warhead is not needed in order to detonate through a countdown

Using Artificial Mass and a Gravity Generator or Thruster Override, one can propel a Warhead at a target, effectively creating a torpedo. Using Landing Gear to hold on to Warheads carries a high risk of detonating them, unless the Warhead is enclosed.

In Creative mode, a player can make torpedoes and flares with Warheads, but it is often more practical to use the Grinder or actual missiles, especially in Survival mode. Missiles are both cheaper to produce and more accurate when fired, although custom-made ordnance does enjoy the possibilities of near-unlimited range and either remote or autonomous homing.

Warheads are used in some Pre-Built Ships to lay traps for unsuspecting players. Usually one of the ship's reverse thrusters is placed so that turning on the Inertial Dampeners will damage and detonate the Warhead. In some cases, this first detonation will set off a chain reaction. 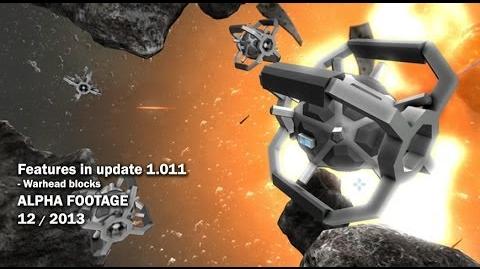 Retrieved from "https://spaceengineers.fandom.com/wiki/Warhead?oldid=17571"
Community content is available under CC-BY-SA unless otherwise noted.