Uranium Ore is the rarest naturally-occurring ore. In its processed form it is the sole fuel for nuclear reactors and to produce 200 mm Missile Containers. The ore has a tarry black appearance, similar to Silicon ore.

Uranium Ore can be processed in a Refinery to produce Uranium Ingots at a 0.7% ratio. Which is to say 1,000 Kg of ore will produce 7 Kg of ingots. Using the refinery, 5 kg of Uranium ingot can be produced per hour, without Yield or Speed modules, at "realistic" refinery speed. 1 kg of Uranium ingot takes up 0.05 L of volume.

As of version 1.189, Uranium ore cannot be found on planets. Instead is it is more easily found in asteroids as an oily black ore. 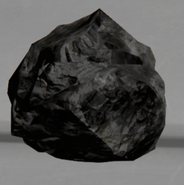 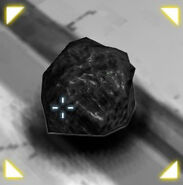 A chunk of uranium ore.

Various ores in an asteroid.
Add a photo to this gallery

Retrieved from "https://spaceengineers.fandom.com/wiki/Uranium_Ore?oldid=17464"
Community content is available under CC-BY-SA unless otherwise noted.