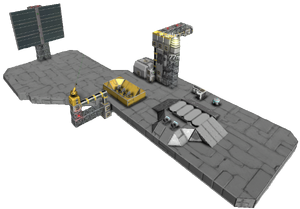 Stations are made of Blocks about 125 times larger than the volume of Small Ship blocks. This does not mean that the mass and costs are increased by 125 times. Some blocks are only available in Stations/Large Ships and some are not available as Station blocks.

If "Station Voxel Support" is on, Stations that are not anchored by at least one block embedded into an asteroid will float freely throughout space. Otherwise, Station blocks are attached to a fixed global grid and cannot be moved.

Retrieved from "https://spaceengineers.fandom.com/wiki/Station?oldid=17094"
Community content is available under CC-BY-SA unless otherwise noted.