Start a Wiki
The

Solar Panels appear on some Pre-Built Ships, most prominently the commercial types which are generated with large arrays at the fore.

In order for a solar panel to produce energy, its solar face must be exposed to direct sunlight. Solar Panels produce energy depending upon the angle of exposure to the sun. The efficiency of the panel is indicated by a series of green bars at the side of the panel. When all of the bars are lit, the panel is at or very near the maximum efficient position. Objects can block sunlight from reaching the panel. The shadow of ships and asteroids can potentially render them useless, while glass panels will only partially reduce solar exposure.

The power grid gives priority to use of solar power, therefore any reactors on the same ship or station can remain active, but will only consume uranium once the power draw exceeds the capacity of both the solar panels and the discharging Batteries.

A Solar Panel attached to a large ship produces a maximum of 120 kW when aimed directly at the sun. The small ship version can reach only 30 kW. The maximum output listed in the control panel indicates its potential output at the current angle, as it takes a short time for them to warm up.

One Panel with full production will produce enough energy to supply a Medical Room, meaning that you are independent from uranium in order to survive. One Assembler, one Refinery and one Gravity Generator will use up to 1,687.13 Kw of energy, requiring 14 Solar Panels to use all 3 with a maximum production of 120 kW per panel. 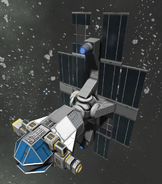 The "Business Shipment" cargo ship with its solar array.

A "private sail" that has 5 solar panels and an incomplete panel.
Add a photo to this gallery
Retrieved from "https://spaceengineers.fandom.com/wiki/Solar_Panel?oldid=15779"
Community content is available under CC-BY-SA unless otherwise noted.