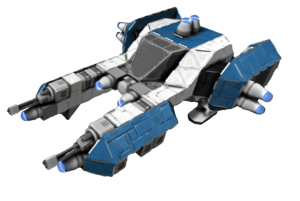 Small Ships are made of Blocks about 1/125th (0.8%) the volume of Large Ship and Station blocks. That is, the base unit is 0.5m rather than 2.5m. This does not mean that the mass and costs are reduced to 0.8%. Some blocks are only available in small ships and some are not available as small ship blocks. Small Ships are started with small Landing Gear. These ships are typically used for short range travel or for fighting against other small ships.

Typically more maneuverable than large ships these craft are a key stepping stone in survival as they are capable of transporting the player in a method safer than the jet pack but are also able to do activities such as mining and repairing.

Retrieved from "https://spaceengineers.fandom.com/wiki/Small_Ship?oldid=16332"
Community content is available under CC-BY-SA unless otherwise noted.