Rotor acts as a swivel for rotating structures on stations and ships. The rotor will conduct power and computer access from one part to another (the Advanced Rotor also connects to the Conveyor system). Blocks on different sections will appear in different colors in the control panel.

Rotors are composed of two sections: the larger external casing (called stator) and the inner shaft with an attachment plate (the rotor itself). While axially aligned, these parts allow some minor movement; if enough are chained together they can even be forced to loop around. Also, though added to the frame as one part, these parts are welded separately, forgetting this will cause rotor plate to disappear.

A workaround using rotors permits full integration of small and large blocks. This is detailed below.

The Rotor can be accessed through the Terminal to adjust many features, including:

The terminal also provides a reverse button that will invert the velocity. Rotors can be grouped to share some controls.

Usually both sections in a rotor are added and removed together, but with careful aiming they can be individually targeted and dismantled/removed with Ctrl+X. This requires that the world be in Creative mode with copy/paste enabled.

Furthermore, large rotors can fit small stators and vice-versa. Constructing one set of each and dismantling/removing the unwanted sections leaves the other, which can then be moved about. When properly aligned, the stator will be able to attach to the rotor, pulling itself into position in the same manner as Connectors and Merge Blocks (warning: if handling large masses, damage may ensue).

Rotors in action.
Add a photo to this gallery 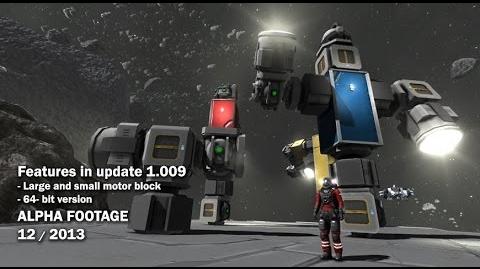 0.009.008 Video
The initial release of rotors.
Add a photo to this gallery
Retrieved from "https://spaceengineers.fandom.com/wiki/Rotor?oldid=15266"
Community content is available under CC-BY-SA unless otherwise noted.