The Mining Transport is a yellow, U-shaped mining operations ship that spawns when the "Cargo Ships" option is enabled in the world options. It has two large cargo containers. It is reasonably nimble for its size, and has a very unusual landing gear layout on the front, as seen in the photo. The conveyor placement is set up for docked cargo transfer.

The ship is best approached from above. The upper engines and the height of the two upper portions of the ship act to minimize exposure to the turrets at the lower end. Match course and speed and then drop in from 'above' for the safest approach. Once on board, seek out the control seat, most easily found as one of the two beacon signals. Reclaim it and then activate inertial dampening. Carefully grind out the two turrets, preferably by eliminating blocks underneath them. Doing so will render the ship mostly safe.

Alternatively, the ship's two Small Reactors are visible from the outside of the ship. Approach from the back and destroy them with ship weapons to power down the entire ship.

All Inventory materials are approximations and are not exact integers. Engineers' results may widely vary. 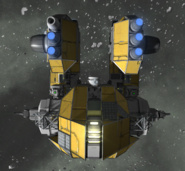 A view from the back.

A view from beneath.

Mining Transport top SE version 1.181.0 6/6/2017
Add a photo to this gallery
Retrieved from "https://spaceengineers.fandom.com/wiki/Mining_Transport?oldid=16034"
Community content is available under CC-BY-SA unless otherwise noted.