Start a Wiki
The

Gyroscope block, when powered, can be used to alter or maintain a ship's orientation (pitch, yaw and roll), as well as to cancel out unwanted rotation of a vessel (Such as stopping a vessel from spinning after a collision with an asteroid).

The effectiveness of a spacecraft's gyroscopes is proportional to the number of working gyroscopes onboard, and inversely proportional to the vessel's mass: Constructing additional gyroscopes on a vessel will make it turn, pitch, and roll quicker. However, if you add armour, machinery, structural elements or in any other way increase the mass which the gyroscopes will have to move, the ship's responsiveness will decrease.

The power level or sensitivity of a gyro can be adjusted from 100% to 0% (off). Well tuned settings allow for very small ships to react to input with precise turning, rather than violent spinning. Large Ship Gyroscopes feature a control panel on their front side, through which the player may access the block's control interface, as well as the rest of the ship's systems. Small ship gyroscopes lack this feature, and can thus only be accessed from a Cockpit or Remote Control.

Although it is the centerpiece of a ship's inertial dampening system, a gyroscope cannot alter a spacecraft's speed. In order to make the inertial dampening system fully functional, the ship should have at least one thruster facing each cardinal direction (forwards, backwards, left, right, up and down). This will allow the gyroscope's internal computer to calculate the ship's orientation using data from the gyroscope itself, and then use both the gyroscope and the ship's thrusters to control the ship's orientation and speed. How long it will take for the dampening system to cancel the relative velocity* of a moving ship depends on the speed of the ship, the ship's mass, the net negative acceleration provided by its thrusters, and the ratio of working gyroscopes to vessel mass.

If you find yourself in a situation where a ship is spinning and method akin to kicking and knocking may be used to help slow the inertia of hurling ships.

*For practical purposes, the inertial dampening system uses asteroids as points of reference, and will attempt to keep the ship stationary relative to these asteroids. This is allows the player to easily maintain a ship's position and oriantation relative to an asteroid during mining or construction operations.

See Gyroscope mechanics for more details about this block's effects.

In some situations, the player may find their self in a situation where a moving vessel's dampening system may be partially or entirely disabled, and the ship moving too rapidly for an engineer to physically restore the dampening system to the level of functionality which is required to stop this movement. Regardless of the cause of the emergency, the root cause of the emergency is at least one of the following:

The first situation may be easily resolved, and the second may be easily prevented. If a ship loses its front thrusters, the pilot may simply turn it and use its side/top/bottom or rear thrusters to slow down for repairs, and vice versa. Power losses are most likely to occur when: 1)There's a pilot at the controls. 2)The vessel isn't moving. Entering and powering up a stationary vessel is easy, and a charged Battery may serve as backup power for stopping a moving ship in case of main powerplant failure. These batteries may be activated by the pilot without needing him/her to leave the seat and physically repair/refuel the powerplants, which may have to be done whilst spinning if the vessel lost power during a maneuver.

Complete loss of gyroscope authority is often a far more serious problem. With no working gyroscopes, a vessel will spin forever (a very long time), and the spinning may itself prevent the reparation/replacement of the gyroscopes. In this situation, the only way to stop the spin is to, literally, stop the spin. Violently. Usually by crashing another (less important) ship into the spinning one in such a way that the spin is halted or at least decreased.

Great care should be taken when the direction of the spin is determined, as a misjudgement may lead the player to ram the second ship into the first in such a manner that the spin not only continues, but does so with increased speed.

Gyroscopes use only a tiny amount of power, regardless of whether the ship is at rest or being made to roll. The large ship version uses approximately 30 W at full power, while the small ship version uses only 0.6 W - 1/50th the power. It is difficult to estimate the exact figures, due to reliance upon power usage outputs while piloting the ship.

A Gyroscope takes up a 1x1x1 block space on both small and large ships. It attaches to blocks only on its bottom face. It must be attached to 1b3Block of space unobstructed. To place it, the Engineer must have Steel Plates. As with other constructs, the Gyroscope's component price scales with size upon its placement. To place a Gyroscope; the toolbar for Gyroscope must be selected in order to begin placement. Where it is placed will determine its component price. Gyroscopes can not be placed on the canopy glass of small ship cockpits or thruster nozzles. 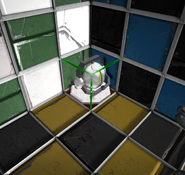 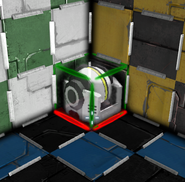 Gyroscope for small ships.
Add a photo to this gallery

Retrieved from "https://spaceengineers.fandom.com/wiki/Gyroscope?oldid=16174"
Community content is available under CC-BY-SA unless otherwise noted.