Gatling Turret is a block in Space Engineers which can be placed on Large Ships and Stations. As of the planetary update, it became able to be used on small ships. It was present in the game in a nonfunctional state, finally becoming operational in update 01.027.

Gatling Turrets can be set to automatically open fire on any meteors, moving objects, missiles, characters, small ships, large ships, and stations within range. It will fire on

Decoys regardless of its settings and will give them priority over other targets. The turret's detection range can also be set anywhere between 1 m and its maximum 800 m. Gatling Turrets deal 60 damage per shot, and fire at 600 RPM - slightly slower than the

When it targets an object, a red tracer laser designates the object it is firing upon. Otherwise, the laser will be green and will "scan" space, although the turret can detect targets in range regardless of the direction it is currently facing. Idle Turret Movement can be disabled via the terminal.

As of update 01.051 turrets can be manually controlled through a cockpit. This can be done by entering the terminal and clicking on the "Control" button or by adding the turret to the toolbar. Players can end manual control by pressing 'T'.

Gatling Turrets are a reliable short-range automatic defense against meteors. Since meteors always spawn from the same general direction (near the sun, in default skybox) you can save a lot of ammunition by placing friendly blocks in front of the turret - so it won't turn and fire at meteors that are already going away from it. That is, put blocks so it can't fire away from the sun.

Gatling Turrets have an inventory which can hold a volume of 64L with Realistic settings. It will only accept

25x184mm NATO ammo containers, of which it can hold four. The turret has an inventory panel on the underside of its base, which can be connected to a conveyor system to automatically fetch ammo from storage.

The turret requires a 3x3x3 space to be placed. It attaches to other blocks only at the base of the turret. 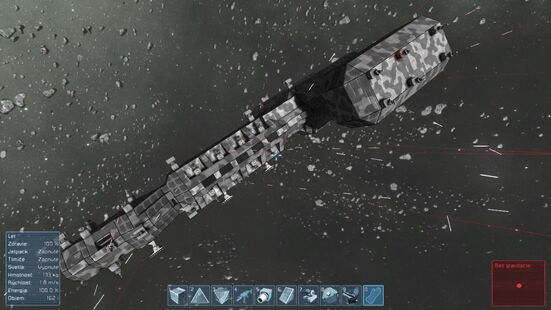 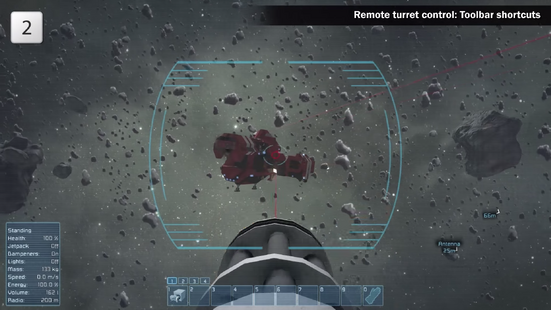 The view when manually controlling a turret.
Add a photo to this gallery
Retrieved from "https://spaceengineers.fandom.com/wiki/Gatling_Turret?oldid=16269"
Community content is available under CC-BY-SA unless otherwise noted.